Highly intelligent and sociable, the cockapoo dog combines the sweet nature of the cocker spaniel with the trainability and good humor of the poodle.

Cockapoo Dog At a Glance 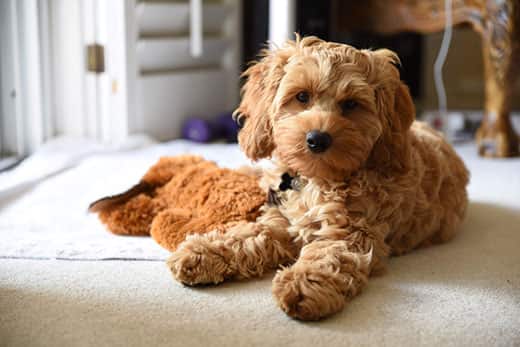 Cockapoos are friendly and affectionate little comedians with a sweet temperament and a zest for life.

As with any type of mixed-breed dog, the appearance of cockapoos is difficult to predict. Their size and weight depends mainly on the type of poodle used in breeding. The adult offspring of a toy poodle can weigh as little as 5 pounds, while the offspring of a standard poodle — known as maxi cockapoos — can weigh up to 65 pounds. Some breeders offer teacup cockapoos that are as tiny as 2 pounds. Most commonly, though, cockapoos are created from crossing a cocker spaniel with a miniature poodle, creating sturdy, medium-sized dogs that weigh around 15 pounds and stand about 14 inches at the withers.

The appearance of their coat is also difficult to predict or control and comes down to which parent breed's genes are dominant. The coat can be straight, wavy or curly, and long, medium or short. One characteristic that is typical, yet still not guaranteed, is that cockapoos usually inherit the low-shedding quality of a poodle's coat. Another characteristic that generally applies to most cockapoos is that they don't tend to produce a strong odor and don't need to be bathed often. While their coats don't need to be cut like a poodle's, they do require regular brushing to prevent matting and remove debris that can get caught in their fur.

Their coloring also widely varies. Cockapoo puppies can be any color that you'd see in a poodle or cocker spaniel, including black, white, red, brown, sable, tan, blonde or a combination of colors and patterns.

Cockapoos are bred more for temperament than for appearance, and they tend to inherit the sweet, loving and friendly natures common with both parent breeds. They are highly intelligent, easy to train and also typically inherit the poodle's enthusiasm and tendency to be little jokers.

These dogs tend to be extremely friendly and thrive on social interaction. They hate to be left alone and can develop separation anxiety if left solo for long periods. They get along well with other pets and children although, due to their high energy and enthusiasm, they tend to do better with older children and should be supervised around young children.

Cockapoos do well in apartments, although maxi cockapoos may be less well-suited for small living spaces than their smaller counterparts. They don't bark a lot, although they will let you know when someone's at the door. They have a moderate amount of energy and can be quite bouncy, but they're also happy to curl up in a lap or next to you on the sofa. They generally require about 15 minutes of exercise a day, which can be achieved by playing in the backyard or with a quick walk around the block.

Although their coats don't require regular cutting like a poodle's, they do need to be brushed regularly — and some cockapoo owners do like to keep the coat trimmed to a certain length. Their floppy ears are prone to infections and should be cleaned and inspected on a weekly basis. Signs of an ear infection include an unpleasant odor coming from the ear, redness or swelling, itching, and constant head shaking.

While cockapoos tend to be healthy and hardy dogs, they can be prone to the same genetic predispositions to health conditions that affect either of their parent breeds, including cataracts, patellar luxation, hip dysplasia, allergies and liver disease. When considering a cockapoo puppy, it's important to do your research and seek a reputable breeder who is happy to answer any questions you have about the parents and their health, disposition and purebred status.

The earliest of what has become known as designer dogs, cockapoos were first created by accident in the United States in the 1960s. Impressed by the sweet and intelligent nature of the puppies combined with their odorless, low-shed coat, enthusiasts began intentionally crossing poodles with cocker spaniels in an attempt to recreate these results. This crossbreed has only gained popularity over the decades.

Cockapoos make excellent companion dogs and family pets. The American Kennel Club does not recognize cockapoos as a true breed, but considers them a mixed-breed dog. However, efforts are underway by cockapoo breeding organizations to get the cockapoo recognized as a true breed.