When Does a Cat's Play Aggression Cross the Line?

Find a dog food that fits your pet’s needs

Find a cat food that fits your pet’s needs

As a cat lover, you've seen play aggression in cats, and you have the scratches to prove it. You may sometimes wonder: Is my cat too aggressive?

Cat play looks like aggression. After all, cats use teeth and claws to subdue toys and playmates — and your ankles. Sometimes innocent roughhousing crosses the line into aggression. Fun and games for them can turn dangerous, even when your cat means no harm. Learn how to identify different types of aggression in cats and how to keep their sharp parts from causing injury. 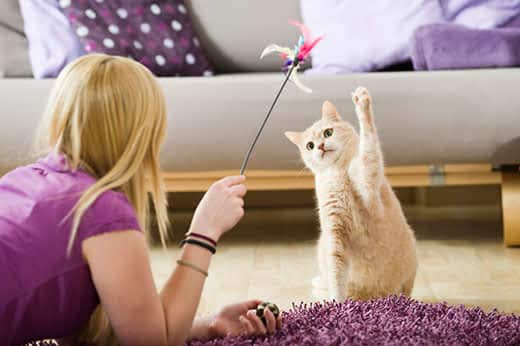 Kittens play to learn how to interact with their world, other cats and people. They also play to practice skills needed in adulthood, such as hunting. Activity keeps cats of all ages fit, and play relieves stress and burns energy.

Kittens play at 4 weeks old. Techniques include object manipulation and social games with other cats and humans. Here are some common ways that cats play

Is My Cat Aggressive?

While dogs vocalize during play, cats stay silent. Even silent kitten play gets too rough when babies haven't learned how to pull their punches. So, is my cat aggressive? With older cats, when silent cat play turns noisy, you won't have to ask.

According to the ASPCA, "Aggression is threatening or harmful behavior directed toward a person, another cat or other animals." You may see one or a combination of the following:

As you can see, the lines can be blurry between normal play and aggression. Pay attention to vocal cues to determine when play has crossed the line.

Other Kinds of Cat Aggression

Adult cat aggression happens for many reasons. You may wonder: Is my cat aggressive if they have good reason to lash out? Top reasons include fear and pain. Both are a cry for veterinary help. Cornell Feline Health Center says other kinds of cat aggression include:

How to Handle Aggression

If you're still asking yourself, "Is my cat aggressive?" you can take steps to mitigate questionable behaviors. Adopting two kittens at a time is the best way to diffuse play aggression in cats. The kittens wrestle and target each other and learn biting and claw etiquette. A savvy adult cat also can teach adolescent cats proper limits.

When playing with your cat, avoid using your hands or feet as toys. Toss a cat toy or use fishing pole lures to redirect their energy out of biting range. Give cats a five-minute timeout in a room alone when play turns rough. Removing the source of their fun teaches them that they must play nice for games to continue.

Avoid physical corrections, as they can increase aggression. The MSPCA-Angell recommends trying noise deterrents, like shaking or tossing an empty soda can with a few pennies inside. This interrupts the behavior so you can redirect to more appropriate targets. Try a "hiss" to tell kittens to stop. It won't work for adults but may give babies pause. Here are some other quick tips:

Cats that draw blood, pull fur, terrorize other pets or scare you require professional intervention. Ask a veterinary behaviorist for expert help. Most cat aggression involves lots of noisy bluffing. Understanding and addressing the cause can prevent problems and get you and your cat back to living a harmonious life together.

Amy Shojai is a certified animal behavior consultant, and nationally known authority on pet care and behavior. She began her career as a veterinary technician and is the award-winning author of more than 35 prescriptive nonfiction pet books.