With her bright blue eyes, white "snow boot" paws, and the other sweet-natured Snowshoe cat characteristics, this breed is the perfect fit for pet parents who have plenty of love and attention to give to their fur baby.

Snowshoe Cat at a Glance

Two of the snowshoe's most distinctive features are her coat and color markings, both of which reflect her Siamese ancestors. Born all-white, snowshoe kittens develop their dark features in the first few years of life. This breed is a seal point or blue point, like a Siamese. However, this kitty has a coat resembling a "tuxedo" where the feet are a different color, which comes from her American shorthair genes, explains The International Cat Association (TICA). As the snowshoe cat ages, it's normal for her coat to darken.

Unique and beautiful, these snowshoe cat characteristics, coupled with her athletic build, make a striking combination. Unlike her Siamese cousins, this breed has a much rounder and fuller face and body. The male snowshoe is much sturdier than the female, but both have muscular bodies. Generally, the head is triangular (although some snowshoes may have round heads), with long ears that are rounded at the tips.

The snowshoe's eyes are another striking feature, ranging from deep to pale blue. No matter the shade of blue, they're always bright and shining. 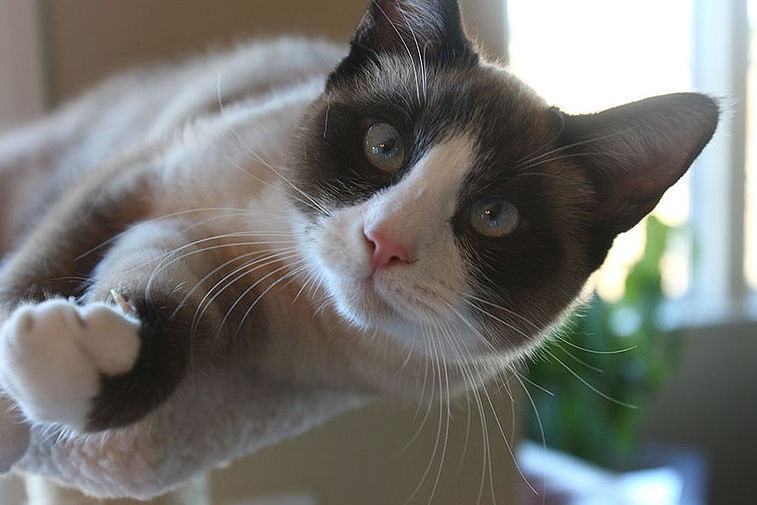 The snowshoe cat is a very kind and intelligent creature with a playful personality. She'll do what she can to get your attention, including jumping on your lap when you're trying to work or observing your every move from a high perch. If you have a snowshoe, you should consider purchasing a cat condo for your furry friend because she loves to be up high.

Her personality definitely is not that of the loner cat, as she requires companionship and isn't happy when left alone for long periods of time. Cats of this breed will attach themselves to one pet parent, and if you're the lucky chosen one, you'll soon discover that you have a constant companion — much like a dog. "They like to be near you, but unlike a dog, they prefer to lead you than to follow you," explains TICA. "Once 'owned,' you will probably never want to be without one." The snowshoe is most content when everyone is at home, and because she is so good-natured, she's a great choice for families with young children or other cats.

If a snowshoe becomes part of your family, it won't take long before you recognize just how much she loves her people. "Anyone looking for an aloof, standoffish cat need not apply for Snowshoe ownership," says Animal Planet. "Fanciers claim that snowshoes don't realize that they're cats; they consider themselves people." When she does greet you at the door after you've been away, expect her to chatter on about what she's been up to while you were out, a feature inherited from her Siamese genes.

Because she is such an intelligent creature, the snowshoe can cause a bit of mischief, so keep her occupied with a rotating collection of fun cat toys that hold her interest, especially when you are away from home. Athletic and speedy, she'll benefit from cat exercises and will appreciate a fast chase around the house, so go ahead and throw her toy mouse across the room. You'll be amazed at how quickly she runs after it.

Don't be surprised if she decides to jump into the tub with you. Snowshoes love the water. Although many cats like to play around with water and enjoy sticking their paws under a running faucet, the snowshoe likes to swim. Providing her with a shallow container of water in which to splash around will keep her entertained for hours.

A relatively new breed, the snowshoe cat first appeared by accident. "In the late 1960's," shares PetMD, "a Siamese cat breeder in Philadelphia, was startled to find three kittens in a litter with the common Siamese pattern, but with unusual white feet and 'socks.'" The fur babies charmed the socks right off the woman, and after a slow start, she sought and received assistance from another breeder. This led to the "crossing Siamese cats with American shorthairs," says PetMD; however, over the past few decades, the preferred combination for snowshoes is the Oriental shorthair and the stockier, "older Siamese," developing the breed as it is known today.

Another contributing factor in the slow rise and the rarity of the Snowshoe is that it adheres to such a rigid, preferred pattern, the markings of which are described above, which has impeded the breed's ability to achieve recognition from many of the world's leading cat organizations. It's very difficult to reproduce these types of markings because they're the result of recessive genes.

Additionally, the recorded history of the breed is spotty and inconsistent. According to TICA, "Much of the history of the Snowshoe was lost due to poorly kept records over time," thus making it difficult to trace its ancestry. Interest in the Snowshoe fell to a low point in the 1970s but then its popularity was on the upswing, and the breed was accepted as "experimental" in the '80s, reaching full status recognition from TICA and American Cat Fanciers' Association (ACFA) in the '90s.

One of pop culture's most famous cats, Grumpy Cat (whose real name is Tardar Sauce), bears some resemblance to a Snowshoe, but her owners say she's a mixed breed. They say she "looks to have some Persian, Ragdoll, or Snowshoe in her line." Tardar Sauce's parents, though, are not Siamese or direct descendants of an Asian line.

Interestingly, the ACFA notes that, although a new breed, the Snowshoe cat characteristics have popped up before the 1960s: "There is evidence of its existence both in an old Victorian photograph of a purebred litter of Siamese in which the front kitten has four white feet and in an old Japanese silk-screen showing one peering around a corner at a spider." These two examples illustrate that the anomaly of white-footed Siamese has intrigued cat lovers for much longer than a few decades.

The Snowshoe cat characteristics that make her a unique and rare kitty are the very same features that cat lovers find endearing and delightful. She loves nothing more than to snuggle up with her pet parents and share the love.