Can Dogs Have Cinnamon?

As a pet parent, you're particularly careful about what goes into your dog's food. You want pet food that's filled with nutrients that will help your dog grow and stay healthy.

Knowing what's in your dog's treats is just as important as monitoring their food. Whether you buy treats or make them, you'll need to know which ingredients are good for your pup and which aren't. While sweet treats that include cinnamon might sound delicious to you, you'll want to be sure certain spices are healthy for your furry friend. So, can your dog have cinnamon? Is cinnamon bad for dogs? Let's find out.

Can Dogs Have Cinnamon? 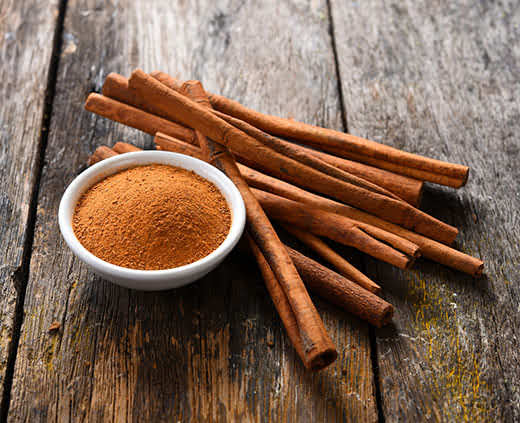 Is cinnamon bad for dogs? The answer to this question is both yes and no. If your pet eats a small amount of cinnamon, you likely don't have to worry about toxicity. Cinnamon shouldn't cause any adverse reactions in very small doses. Larger doses and certain types of cinnamon, however, may cause some concern. In a Pet Poison Helpline article, Catherine Angle, DVM confirms that it's not necessarily the ingredient that's the problem, but it's the dose and form that create the toxin: "Large overdoses of the powder or exposure to the essential oil can lead to low blood sugar, liver disease, vomiting, diarrhea and changes in heart rate." According to Dr. Angle, a large dose is 1 teaspoon of the powder and a smaller amount of the oil.

The ways dogs most commonly experience side effects after eating cinnamon include irritation and sensitization — particularly in their mouths. Also, dogs may ingest the spice by way of breathing it, which may cause lung irritation, difficulty breathing or coughing.

If your dog eats cinnamon, the first thing you need to do is determine what type of cinnamon and how much of it they consumed. Did your dog start chewing on cinnamon sticks they found in your kitchen? Did they ingest cinnamon essential oil, ground cinnamon or cinnamon in baked goods? How much were they able to ingest? Once you've figured out what type of cinnamon they've ingested and how much, you can call your veterinarian and seek their guidance on the next best steps for your pup.

Other Common Spices to Watch Out For

While cinnamon is OK for your dog to ingest in very small amounts, it likely isn't the only spice in your spice rack. Here are a few spices you'll want to keep away from your dog.

In the Pet Poison Helpline article, Dr. Charlotte Flint says, "If a very large amount of nutmeg is ingested, myristicin toxicity can cause symptoms including hallucinations, disorientation, increased heart rate, high blood pressure, dry mouth, abdominal pain and possibly seizures." Much like cinnamon, Dr. Flint notes, these adverse outcomes are unlikely to occur if your pet eats food with nutmeg in it. Pure nutmeg, however, should be avoided.

Onion and Garlic Powders or Salts

You know to keep your dog away from onions and garlic, so make sure the powders of those vegetables are stored in a safe spot your dog can't access as well. And remember, this goes for anything in the onion family, such as shallots, scallions, chives or any other dried onion products you might have in your spice cabinet.

Black pepper isn't necessarily toxic for dogs, but ingesting too much of it may cause stomach problems, like gas or diarrhea. While salt isn't quite a spice — it's a mineral — it's also on our list of ingredients to keep away from your pet. Like cinnamon, salt is only harmful if your dog consumes too much of it. A significant intake of salt may increase blood pressure or aggravate heart disease, among other issues.

Even though cinnamon is OK in small amounts, it's best to keep it out of your pet's reach when you're cooking, baking or planning where to safely store your spices. If you're worried about anything your dog ingests, contact your vet immediately.

Erin Ollila is a pet enthusiast who believes in the power of words and how a message can inform—and even transform—its intended audience. Her writing can be found all over the internet and in print, and includes interviews, ghostwriting, blog posts, and creative nonfiction. Erin is a geek for SEO and all things social media. She graduated from Fairfield University with an M.F.A. in Creative Writing. Reach out to her on Instagram @ErinOllila or learn more about her at http://erinollila.com.