Blunt-faced and expressive, the Tibetan spaniel dog is a small, active breed with a happy disposition and a playful personality. The "Tibbie" is not a truly a spaniel, but is more closely related to other Asian blunt-nosed breeds, including the Pekingese and the pug. A distinctive mane around the neck, plumed tail, and wide eyes make this breed elegant and adorable. Keep reading for more Tibetan spaniel information that will help determine whether this breed is right for you.

Tibetan Spaniel Dog at a Glance 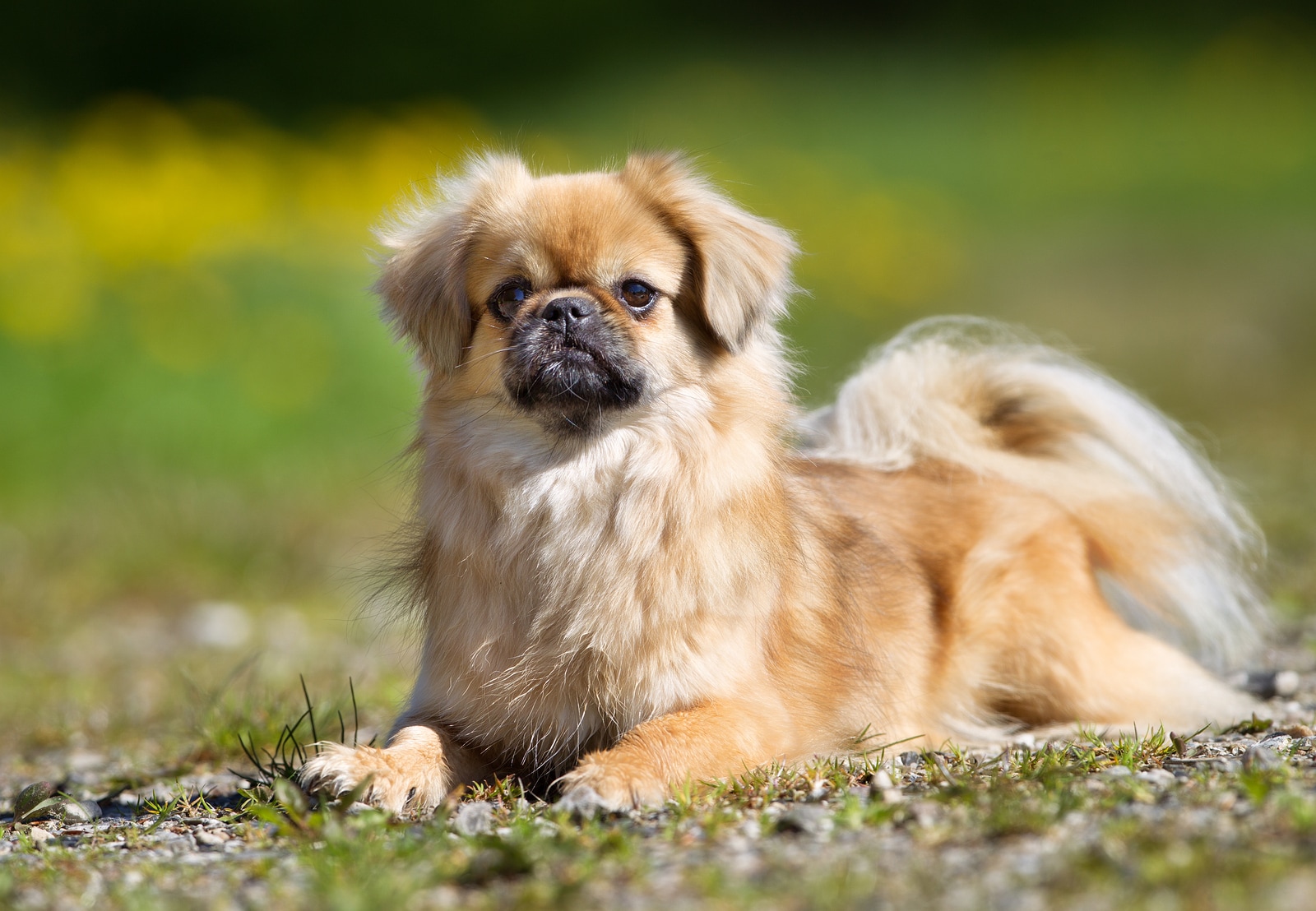 Tibetan spaniels, affectionately known as "Tibbies," are a small Asian breed in the Toy group. At first glance they bear a slight resemblance to the Pekingese, to whom they're closely related, but Tibbies have a slightly longer snout with a less pronounced underbite and eyes that don't protrude as much as their Chinese cousins.

Tibetan spaniel dogs typically stand about ten inches at the withers and can weigh anywhere from nine to fifteen pounds. They have a rounded head with wide, expressive, coffee-bean eyes, a blunt snout with a slight underbite, and pendant ears. One of this breed's most distinctive features is a thick mane around its neck that has earned it the nickname "the little lion."

Tibbies have thick, double-coated fur of moderate length. Their tails tend to be carried high and are covered with a fringed plume of fur that usually lies curled over the dog's lower back. An interesting tidbit of Tibetan spaniel information is that this breed can come in any solid color or any known color pattern or combination.

Tibetan spaniels are happy, playful little companions. Watchful and alert, they make good watchdogs, although they are not prone to excessive yapping like some toy breeds. Tibbies tend to be somewhat reserved around strangers and should be supervised around children, but generally get along well with other pets.

This is an intelligent breed, and although Tibbies have an independent streak, they tend to do well with training that involves positive reinforcement and gentle correction. These little dogs are fiercely loyal and loving. Despite their reticence with strangers, they need a lot of social interaction and love to stick closely to their human guardians. 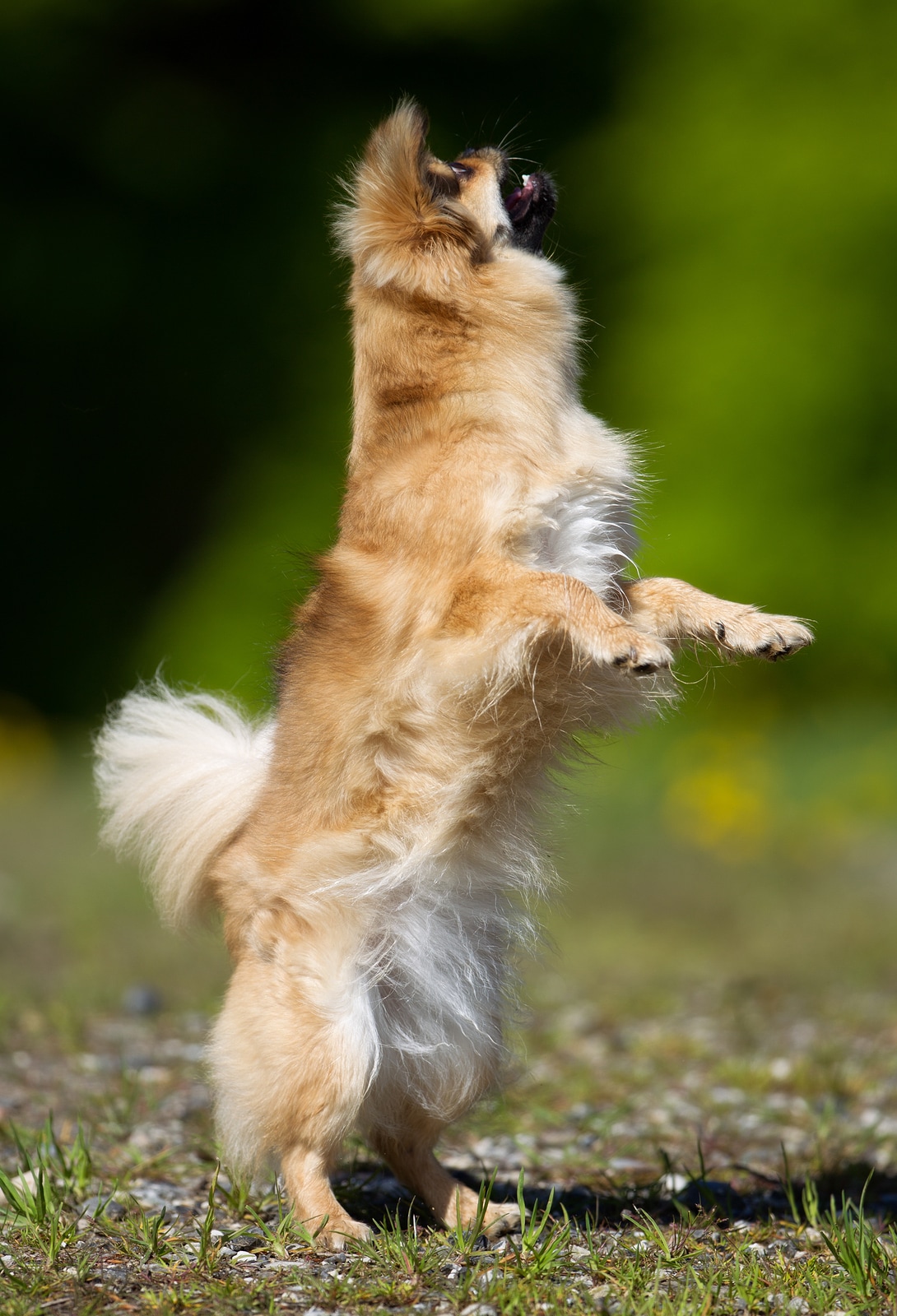 The Tibetan spaniel dog is energetic and active, but doesn't require a lot of exercise, which makes him an excellent apartment dog, says Dog Breed Info Center. He'll enjoy going on walks but be equally satisfied with play sessions chasing his favorite toys around the house. Tibbies also enjoy snuggling with their people, and they like to perch in high places, such as on the back of a sofa or chair, where they can keep an eye on things.

Tibbies don't need to have their coats trimmed, but they should be brushed a couple times a week to remove dead hair and mats. The feathering on the ears, thighs, tail, and feet—especially between the toes—will also need to be combed regularly to prevent tangles. Tibbies shed twice a year. During this time, they'll need to be brushed more often to keep up with all the excess hair. The ears should also be checked on a weekly basis and cleaned when necessary.

Though generally a healthy breed, like many small breeds, Tibbies are prone to patellar luxation, a condition that causes the knee caps to occasionally dislocate. Often this is a minor issue that goes largely unnoticed, although dogs with this disorder tend to be more prone to developing arthritis later in life. If the condition is serious enough to cause your dog chronic pain, it may require corrective surgery. Tibbies are also genetically prone to canine epilepsy and congenital deafness, as well as eye diseases like progressive retinal atrophy and retinal dysplasia. If you have a Tibbie, you should get his eyes and ears checked regularly.

Tibbie puppies should begin training and socialization from the day you bring them home. These are intelligent dogs that tend to learn quickly and eagerly as long as training is made fun. If you wait too long to start training, however, they may become headstrong and stubborn, making training a challenge. It's best to get your Tibbie pup into a puppy training class by ten to twelve weeks of age. If properly trained and socialized, adult Tibbies are generally well-behaved dogs.

Today's Tibetan spaniels can trace their roots back centuries to Tibetan monasteries that practiced a form of Buddhism in which the lion was a revered symbol. These little lion-like dogs were kept and bred by Buddhist monks to serve as alarm dogs, says DogTime. In carrying out their assigned tasks, these little dogs would perch on high walls and in windows to keep watch and alert the monks to any potential dangers to the monastery.

In the late 19th and early 20th centuries, British missionaries to Tibet became enamored of these little dogs and brought them back to England. Western breeding programs for Tibbies faltered during World War II, and as such, they weren't well-known in the United States until a breeding pair imported from Tibet in the 1960s had a successful litter. This litter belonged to a sexton at Trinity Lutheran Church in New Haven, CT, and was adopted out to eager parishioners. From there, the popularity of this breed took off, leading to the formation of the Tibetan Spaniel Club of America in 1971. Still, it wasn't until 1983 that the American Kennel Club recognized this rare but highly-sought breed.

While the Tibetan spaniel isn't an easy breed to come by, these sweet, fun, and adorable little companions are worth every minute spent tracking down a reputable breeder or keeping an eye on rescue shelters for a Tibbie in need of a loving home.