Although it may give the impression of a big, lazy hound, the Rhodesian ridgeback has won admirers for its innate qualities. It is gregarious with a quiet, gentle temperament and is an excellent companion.

Rhodesian Ridgeback At a glance 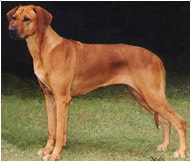 The Rhodesian ridgeback, often referred to as the African Lion Hound, is a native of South Africa.

The hallmark of this breed is the ridge on the back.

This is formed by the hair growing in the opposite direction to the rest of the coat. It starts just behind the shoulders and continues down to just before the hips. At the beginning of this ridge are two identical crowns (whorls) directly opposite each other.

The Rhodesian ridgeback is a strong, muscular, balanced and athletic dog. He is capable of great endurance with a fair amount of speed. Males range in height from 25 to 27" (85 pounds, 38 kilograms) and females from 24 to 26 inches (70 pounds, 32 kilograms). Known for an even, dignified temperament, the ridgeback is devoted and affectionate to his master and reserved with strangers.

The color of a Rhodesian ridgeback ranges from light wheaten to red wheaten. A little white on the chest and toes is permissible, but excessive white there, on the belly, or above the toes is undesirable.

The Rhodesian ridgeback has won many admirers for his innate qualities. The breed possesses many of the characteristics generally associated with Hounds, but is somewhat tougher than the typical hound breed. The ridgeback has a quiet, gentle temperament and rarely barks.

Although he may give the impression of a big, lazy hound, the Rhodesian ridgeback can be a threatening presence. This dog was bred to hunt and be a family protector. The ridgeback is easily trained and has above-average tractability.

Because of their innate abilities as guardians, ridgebacks should not be trained as protection dogs. Their natural protective instinct should be subjected to elementary obedience training for control.

Rhodesian ridgebacks are extremely tolerant dogs and excellent companions. Ridgebacks are gregarious animals, enjoying the company of other dogs; but families should be cautious about having several male dogs in one household, because this can lead to dominance struggles. These dogs can be good with cats if brought up with them.

They are good with children, but both child and dog must learn to behave around one another. Because of their size, younger and more excitable ridgebacks may knock over small children by accident. Ridgebacks are protective of children and other household members. These are excellent natural watchdogs and family protectors, but they do need to know that the caregiver is in charge.

Ridgebacks are not barkers, but they will be an alert watchdog to anything unusual. Athletic dogs, they can be climbers and you may find their natural curiosity taking over when there is something interesting on the other side of the fence! Not natural diggers, they may, however, create some cool summer "caverns" in your backyard if left unsupervised.

Rhodesian ridgebacks are extremely clean dogs with little odor and minimal shedding. They can be termed an "easy keeper" when it comes to food, but you may have to monitor caloric intake to keep them from overeating and becoming obese.

The Rhodesian ridgeback, often referred to as the African Lion Hound, is a native of South Africa. The breed's history dates back to the 16th century when the first Europeans explored the interior on the Cape of Good Hope. Here they discovered the Hottentot tribes living with a semi-domesticated dog that had hair along his spine — growing backwards. This is what we now refer to as the "ridge."

The Rhodesian ridgeback was bred by the Boer farmers to meet their needs for a hunting dog in the wilds of Africa. They needed dogs that could flush game, pull down larger wounded game and guard their farms from prowlers and wild animals at night. The farmers also needed a dog that could withstand the rigors of the African bush, handle the drastic changes in temperature from the heat of the day to the freezing night temperatures, be short-coated to avoid ticks in the brush, and that could go 24 hours without water. This dog also had to be companion and protector to his wife and children.