An active yet easy-going dog, the Australian shepherd loves to romp with children and tends to get along well with other pets.

Australian Shepherd At a glance 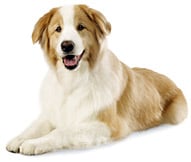 Australian shepherds are medium-sized dogs with a solid build and low center of gravity.

Aussies have a lush, medium-length coat that is straight or slightly wavy. They have feathering on the back of the legs and a generous mane around the neck. Coat colors vary and might be blue or red merle or red or black tricolor, all with white and/or tan markings. Most Aussies have a naturally short tail, but sometimes tails are docked if longer than four inches.

Aussies are active yet easy-going dogs that love to romp with children. They tend to get along well with other pets. The breed is considered highly intelligent and easy to train. Aussies are known for being especially eager to please their owners.

True to their herding instincts, Aussies are very protective of their families and territory and will let you know if strangers approach, but they are not considered aggressive.

Australian shepherds, particularly those from working lines of the breed, are active dogs that need to be busy. Left alone and confined, they become unhappy and can be destructive. They are best suited to country living or, at the very least, should have a large fenced yard and owners who want to spend time with their dog.

Aussies are considered average shedders. Despite their lush coat, weekly brushing with a bristle brush and bathing occasionally as needed will keep their coats nice and help prevent matting.

Historical reports on the origin of the Australian shepherd vary widely among various sources. According to one theory, Aussies were entirely developed in the United States to work on ranches. Their ancestors may have been Spanish herding dogs that originated in the Basque region of Spain and France and were brought to the United States with herds of Merino sheep during the early colonial days. Collie may also be in the background of the breed. The dogs are called Australian shepherds only because they were associated with Basque shepherds that came from Australia to the United States in the 1800s.

Besides working as herding animals, Aussies serve as police dogs, narcotics detectors and competitors in obedience trials. They also make great family pets. They are a recent addition to the AKC herding group; some Aussie breeders fear AKC recognition may create undue emphasis on appearance over ability. The Australian Shepherd Club of America was the main registry of Aussies before AKC recognition and remains a powerful force in the breed.