Among the most popular cat breeds, the Abyssinian is easy to care for, and a joy to have in your home. They’re affectionate cats and love both people and other animals.

Abyssinian At a glance 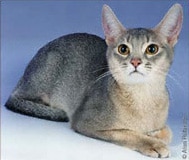 The Abyssinian’s fur carries bands of color giving her a richness and depth not seen in other breeds.

The Abyssinian is a medium-sized cat with a long body and nicely developed muscles. She is an active cat that loves to jump and play.

The Abyssinian is moderate looking in all aspects with smooth planes on her head. She has a gentle dip in the triangular head. Her rather large ears sit tilted forward on her head giving her an alert, aware look about her as if she is always paying attention to everything that is going on around her. Her eyes, which look large in her face, show the alertness and intelligence inherent in the breed.

The coat on the Abyssinian is short and has tufts of hair in her ears. The coloring of the Abyssinian is very special. The majority of the fur has bands of color on each individual hair with the coat looking darker along the spine line. The color on her body softens and lightens under the neck and the underside of the cat and the insides of her legs.

Abyssinians are active cats and generally will keep their weight under control with compensating exercise. They should have some high perches and cat trees available to them so they can jump and climb.

Abyssinians are social cats and like to have some company. This company can be provided by having another cat or pet around when human companions are not at home.

While the Abyssinian cat is considered to be the breed that can trace her roots directly to the Nile Valley, she was actually developed in Great Britain. In the 1860s, a cat was brought to Britain by Lord Robert Napier following a military expedition to Abyssinia. This cat was named Zulu and she was the foundation of the beautiful breed known today as the Abyssinian. The unique ticking pattern on the co,at of the Abyssinian reminded people of the camouflage pattern on the coat of the wild rabbit. This characteristic was so delightful that Zulu was bred to random-bred cats that carried a similar look to their coat and the Abyssinian breed was created.

The breed itself was extremely popular and Abyssinian cats were soon being bred throughout Europe and in the United States and Canada. This popularity proved to be the salvation of the breed as the two world wars almost decimated the breed in Europe. New Abyssinians were imported and the breed continued. In the late 1960s, when the feline leukemia virus almost destroyed the breed once again in Britain, more Abyssinians were brought into Britain to reestablish the breed again.